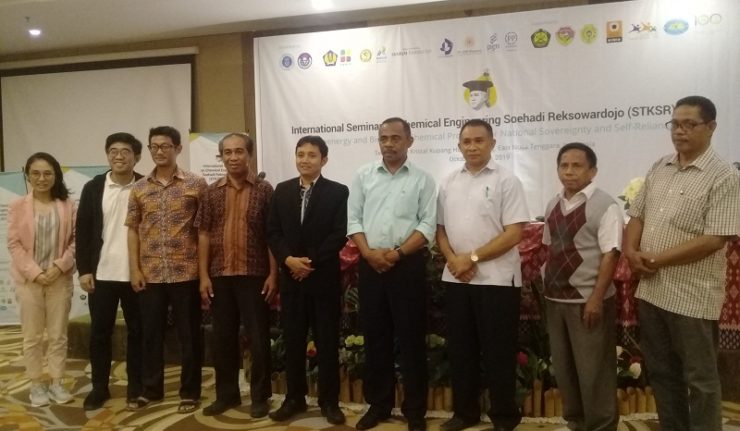 The seminar with the main theme ‘Bioenergy and Bio-Based Chemical Products for National Independence and Sovereignty’ will be held on 7-8 October at the Swiss Bellin Kristal Hotel, Kupang.

Interestingly, in the seminar, there were 122 papers that would be presented by article contributors from six countries, such as New Zealand, Australia, Japan, Malaysia, and Indonesia. Some of the contributors are from NTT who will present their findings and scientific studies that they conducted and obtained during the research.

This was conveyed by the Chair of the Seminar Committee Dr. Antonius Indarto to the media crew, Saturday (5/10) at the Swiss Bellinn Kristal Hotel Kupang.

The purpose of this activity is to create a forum or forum for discussion and often fuel, chemical products and electricity with renewable natural resources. In addition, to get various information, formulation of issues and technical and technological ideas from researchers, academics, entrepreneurs and government related to the development of bioenergy technology, production of bio-based chemicals including food and electricity from renewable natural resources.

The chemical engineering study program in recent years has focused on conducting various research studies in the field of technology development, processes and production for transportation, and the use of various alternative energy sources for electricity. A number of studies have been published, one of them through an annual forum, namely the International Seminar on Chemical Engineering Soehadi Reksowardojo (STKSR).

He added that to find comprehensive ideas and formulation of technological development of fuel and electricity production processes with renewable natural resources, there needed to be synergy between stakeholders, both the community, academics, business people and the government.

“Therefore the synergy is manifested through a conference such as STKSR 2019, as a forum to facilitate Indonesia’s future interests and the development of bioenergy technology and the production of bio-based chemicals and electricity with renewable natural resources. The target of this seminar is to strengthen the vision related to the development of bioenergy technology, the production of vegetable-based chemicals and non-renewable electricity, “he explained.

He hoped that through this seminar, they could gather all scientists, academics, and the NTT Government, so that together they could discuss and discuss how to equalize and sharpen their vision and mission, so that later they could jointly achieve one goal for the development of this bioenergy, especially in NTT .

“I really appreciate the development carried out by the Province of NTT, which is Moringa products that have been developed here, and this is one of our independent forms and does not depend on imports, hopefully this seminar can make us walk in the same direction so that the effect will be felt , “He explained.

The Chancellor of Artha Wacana Christian University Kupang Job UI Meko also appreciated the international seminar. He said that of the many universities in NTT, ITB chose to collaborate with UKAW in organizing this seminar.

“I am very grateful to ITB for choosing Artha Wacana University Kupang, this seminar will give other nuances and motivations to both participants and sympathizers,” he said.

According to him, Eastern Indonesia has many types of plants that produce seeds in which there is fat and these types of plants can be utilized for the benefit of producing bioenergy. Therefore, this seminar is an initial trail initiated by the Faculty of Agricultural Technology, Bandung Institute of Technology, in the future it can work together to produce bioenergy from plants in NTT. (mg-23 / C-1)